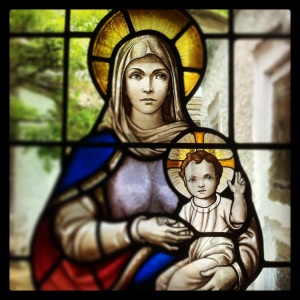 Alpha: A Holy Flaring Forth! A Big Bang! A Cosmic Christ!

Omega: A Holy alphabet chanting itself into being!

A Universe singing to itself.

Adventus means coming. This year, on November 30, we end Ordinary Time in the Liturgical cycle and begin a four Sunday celebration leading up to Christmas. This year I am trying to deepen my experience of Christmas by making a small Advent Wreath on my personal altar and having daily contemplative devotionals leading up to Christmas day. Growing up, the secular rituals of gift giving, and the sentimental retelling of the nativity scene were fun, but this year I am trying to take more seriously what a story about a child born in a barn has to do with my fledgling contemplative spirituality within the Anglican Church.

The exact date of Christ’s birth may be unknown, but the choosing of December 25th as a fit day for celebration comes to us thanks to the Winter Solstice. It is on this day that we celebrate the sun ending its six month droop in the sky, and hence beginning his slow march back toward spring and summer. We celebrate the coming end of long darkness.

Advent then is a time of Holy Waiting for the end of spiritual darkness; of anticipation for Christ’s birth, but also hope for his return. In Trinitarian Christianity the event of Christ’s birth is referred to as the Incarnation. God became flesh in the person of Jesus of Nazareth (Mormons might call this a Condescension; see 1 Nephi 11).

What has humbled me most about this idea is that it means that Christ did not just descend to the earth and then leave when he died 33 years later like some Holy Alien. According to the familiar words of John “In the beginning was the Word, and the word was with God, and the Word was God” (1:1). If Christ is the Word of God then Creation is the alphabet. Another analogy from Paul’s letter to the Colossians: “He [Jesus] is the image of the invisible God, the firstborn of all creation; for in him all things in heaven and on earth were created, things visible and invisible, whether thrones or dominions or rulers or powers—all things have been through him and for him. He himself is before all things, and in him all things hold together” (1:15-17). Jesus as Christ is an Icon (image) of God in Creation. Christ is both the expression of God and the Image of God. Thus, we might say, as many have that the Incarnation began not just with the blessed birth of Jesus, but also with the Great Flaring Forth of the universe 13.8 billion years ago from a single point trillions of degrees hot. This is a tremendously powerful notion for me. At the center of a sometimes silly pastel plastic Nativity scene, is not only our God and our Savior, but a reassurance that we live in a Holy Universe.

This year I have created an Advent Retreat called Holy Waiting in a Holy Universe. I have divided the four weeks of Advent into the traditional four elements (Fire, Air, Water, and Earth), juxtaposing scriptures about each element with scriptures about the Coming of Christ. I hope that each day I will deepen my understanding of what it means to live in an Incarnational Universe. The gifts I give to family and friends will be offerings that remind us that we live in such a universe. Blessings to you and yours during this time of Holy Waiting and please feel free to follow along with me on my Advent retreat!

Download a Pdf of it here: Holy Waiting in a Holy Universe: An Advent Retreat 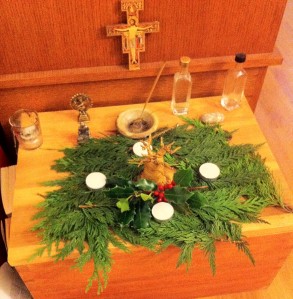