About a week before Lent began, I took a retreat to a Benedictine monastery in central Washington. Unlike several of the other monasteries I have visited, this particular monastery was located in a more suburban setting, and, founded as a small college, the monastery is now a bustling university.

I went hoping for some silence, writing time and immersion in the familiar rhythms of the monastic liturgy. When I arrived, however, the first thing I noticed when I got out of the car, was how loud it was. I could hear I-5 rushing and hushing in the background. In addition, the liturgy was not chanted but spoken, which made it feel less vibrant, and the space of the chapel was one of those ill conceived modernist boxes. Nonetheless, the monks were kind, and I enjoyed talking with them, and learning about the monastery’s history.

The monastery started with close to 600 acres, but now retained only about 350, most of which was devoted to the campus and student housing. They had a small farm operation in the 1930s-1950s but it ended by the 1960s. Even with a smaller footprint, the monastery had taken good care of the remaining second or third growth forests, which had a number of walking trails. And even with the white noise of the freeway in the background, I enjoyed walking them.

Despite the loveliness of the forest, I ended up having a difficult time writing, felt restless during the spoken Divine Office, and everywhere I went, the freeway was audible. I ended up leaving early, so I could get home and regroup.

On the way, feeling the weight of dissertation anxiety and something of the distance that opens between us and the Divine at times, I decided to go for a hike at my favorite protected area in Bellingham, Washington, Stimpson Family Nature Preserve. It was late in the afternoon, and a friend and I headed around the wet, still snowy in places, trail.

It is one of the few older growth forests in the area, and I often feel God’s presence there as I breathe the clean cool air, and marvel at the riot of colors. But this time, riding the wave of restlessness from my retreat, I felt a very strong sense of God’s absence. It hit me like a wave, a sudden pang of nihilistic agnosticism, and the darkening forest, still silent and deadened to winter, felt cold, indifferent and lifeless.

For several days after this, I pondered the dark mood that had descended. I stopped praying, and considered skipping Church for a few weeks. My usual excitement for Lent turned into a smoldering dread.

I recently decided to join an Anglo-Catholic Parish in Vancouver because of its wonderful liturgy, and I had signed up to be part of the altar party as a torch bearer on Ash Wednesday. So, despite the darkness that had descended onto my spiritual life, I decided to go.

At first I felt sad, and distant, but as the liturgy proceeded, my attention sharpened, and I began to feel lighter. During the consecration of the Eucharist, which like Traditionalist Catholic Mass is said with the Priest facing the altar, as torch bearer, I knelt with the candle behind the priest. As the bells rang and the priest lifted the bread and then the wine, a subtle shift occurred in my chest. The utter strangeness and beauty of the liturgy penetrated my dark mood, and lifted me back into a place of openness and receptivity. It was nothing profound, or revelatory, but a perceptible change. I was again, ready to enter into simplicity and silence of Lent, in anticipation of Easter.

Reflecting on this ‘Dark Night of the Soul’, I began to understand the gift that God’s absence can sometimes be. I remembered the scene in 1 Kings 19, where Elijah is called out of his hiding place in a cave by God:

Of course God is present to all things, but She cannot be confined to any one of the elements. Having experienced God’s presence so deeply in forests over the years, it was alarming to feel such a sense of despair, and emptiness. But it is true, just as the forest is a place of beauty and life; it is also a place of suffering and death. If God were wholly present to the forest, there would be no distance to cross between us.

“Our relationship with the environment can never be isolated from our relationship with others and with God. Otherwise, it would be nothing more than romantic individualism dressed up in ecological garb, locking us into a stifling immanence” (Laudato Si, 119).

I am most certainly guilty of romanticism, but this phrase, “stifling immanence” keeps coming back to me. God is everywhere present, and hold all things in existence at each moment. But there remains an infinite gap between us.

As I deepen my Lenten journey with prayer, fasting and silence, I am grateful for this lesson, and it has served as rich food in the Desert of Lent this year. 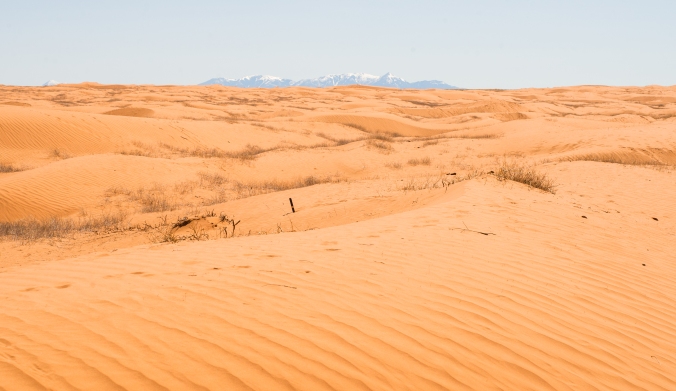